For my 19th birthday, my family-in-law gave me a really, really amazing present: a ticket to go see Editors performing at the Heineken Music Hall in Amsterdam. That was in June and several months later, it was finally time to go see one of my all-time favorite artists performing.

Editors is band that I have seen performing a couple of times, both at festivals and concerts, and every single time, they manage to surprise me. The band does not change its formula, in fact, once you have seen one of their shows, you pretty much know how it’s gonna go – but with their current IN DREAM tour, they still manage to completely bewitch the audience.

The bewitching already started with the very first song, the haunting, slow and dark opening sequence of “IN DREAM“, called “No Harm“. It really set the mood while Tom Smith and his consorts climbed the stage: dark, brooding and mysterious, yet incredibly powerful. From the slow and mysterious opening sequence, the band immediately dove into “Sugar“, one of the more well-known songs of the fourth album “The Weight Of Your Love”, and it majestically switched around the entire mood of both the music and the audience. This was actually one of the strongest points of Editors’ performance last week; they alternated between better and lesser known work, and between big, bombastic songs and more slow and intimate tracks.

One of the highlights of the concert was a surprising one. “Salvation“, perhaps the most brilliant song of “IN DREAM“, is a track with a very brooding, strings-driven build-up and a dark and bombastic refrain, where Tom Smith continuously shouts “SALVATION” – it is a very, very powerful song, but also a very complex one. The question was whether the song would have the same powerful darkness when performed live as it has on record. Truth to be told, it was even more powerful and impressive performed live. Editors’ perfect performance was strengthened with fire shots, that blazed in front of the stage every time “SALVATION” was shouted through the concert hall. The fire of the flames were so hot, that I could feel it on my skin.

From the blazing hot and bombastic “Salvation“, to an acoustic version of “Smokers Outside The Hospital Doors“. I think this was actually a very brave decision of Editors, because “Smokers” is one of the most popular songs at it is always a hit by the audience. The way it is normally performed, it is usually one of the highlights of an Editors’ concert, because everyone knows the song by heart and everybody dances and sings along. Only last week, just Tom Smith performed the song, with only his guitar to support him, in a beautifully touching acoustic version.

What was really noticeable, was that the audience was very familiar with the older works, such as classics like “Munich“, “The Racing Rats” and “Eat Raw Meat = Blood Drool” and at those moments, the HMH was on fire. The audience sang and danced along, bewitched as they were by the music. Unfortunately, during the relatively newer works from albums “The Weight Of Your Love” and “IN DREAM”, it was noticeable that the audience did not know or did not like the music as much. This was really a shame, because the newer songs were performed with a lot more energy and conviction than the older works. 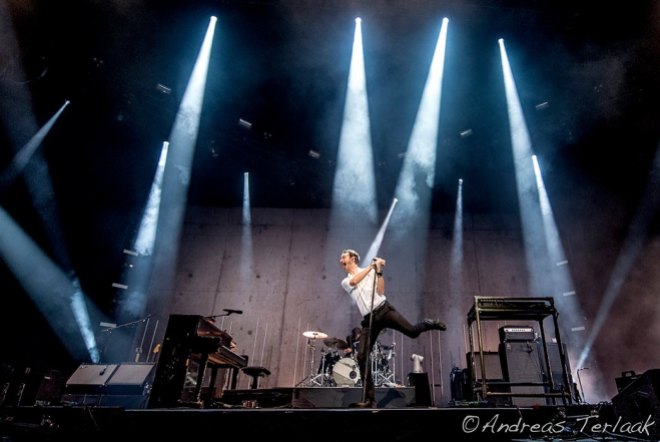 Another really surprising of the show was the final song. I have seen the last three tours of Editors and every single time, they ended the show with “Papillon“, the best known song from Editors. At festival performances, this song shoots the audience through the roof, with everyone dancing and jumping and singing along with “It kicks like a sleep twitch!”. But during last week’s concert, Editors choose “Marching Orders” as their finale song. Another brave choice, but in the end a very good one. While it is a song that is not as popular as “Papillon“, it felt just as big and bombastic and blazing.

It was another great concert by Editors, one with only highlights, performed with so much passion and energy. Only personally, I would have liked it if the band had performed more work from their third album, “In This Light And On This Evening”, but that is just personal taste. Taken everything into account, Editors proved, once more, that they are perhaps one of the best live bands out there.

The photos featured in this post were made by Andreas Terlaak Photography.

Hey there, welcome to Almost Famous Writer! Every week you will find a fresh new article about film, music, books and lifestyle on this online magazine with a personal touch.